Made from Strips of Chewed Bark, Wasp Nests Can Be Found in Dark, Cool Places 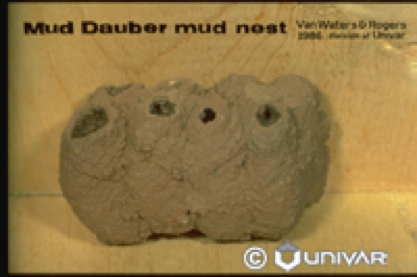 Mud Daubers are named after their “nests” or brood chambers which they construct out of the mud.  These clusters of mud are often attached to the walls of buildings.  The females collect spiders which she stings and renders them paralyzed.  She places them inside the mud chambers then deposits an egg on one of the spiders in each chamber before sealing it.   When the larval wasp hatches, it feeds on the spiders provided, molting several times.  It later pupates and transforms to an adult wasp which emerges from its mud chamber.  They are usually yellow and black or predominately black with bands of yellow or white depending on species.  Mud Daubers are usually 1 to 2 inches in length also depending on species and are “solitary” wasps, which do not have a nest and do not cooperate with others of their kind.  The most common are the Organ-Pipe Mud Dauber, the Black and Yellow Mud Dauber and the Blue Mud Dauber. These wasps rarely sting people even when provoked. 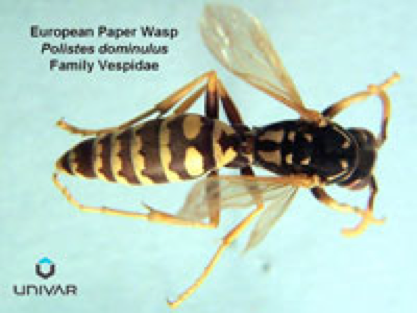 This wasp is the most commonly encountered of the wasp family. It is often annoying us at BBQ’s, competing with us for our food and soft drinks. The Yellow Jacket Hornet is just as prevalent around homes and is often mistaken for the Umbrella Wasp. They are very similar in appearance and habits as well as having nearly identical nest sites. The “honeycomb” in appearance nest is constructed of cellulose material and saliva. It mostly resembles “paper” hence the name. They are constructed upside down and look like an inverted umbrella. The Yellow Jacket’s nest is quite similar in composition and location except if may be located underground whereas the Paper Wasp builds its nest in bushes, trees, house eaves and even the occasional vehicle. Any place offering harborage and a location in close proximity to food and water sources will usually have nests hanging in the warmer spring to summer months. These nests can grow with up to 2000 cells which are readily protected by all individuals not laying eggs. The wasp can sting multiple times, unlike the Honey Bee which dies shortly after stinging when its stinger is ripped from its abdomen. 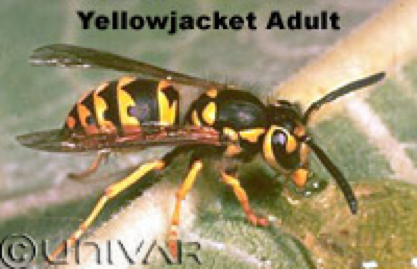 This is the most important structure infesting wasp we encounter in California. These beneficial social wasps live in colonies, which number thousands of individuals and would not be a threat to humans except for their opportunistic behavior of nesting in structural voids, attics, and cavities associated with landscaping features. They scavenge in trash cans and forage for the food and beverages of people trying to enjoy the outdoors. They feast on ripe fruit in our gardens, farms, and vineyards. Finally, in the autumn when the temperature outside cools and food becomes scarce, nest population and expansion is greatest, and newly emerged reproductive seek warmth and light by invading our living spaces. Colonies usually go unnoticed until late summer and fall when their numbers are at their greatest. When it becomes too cold outside for them to survive, they will find a place in an attic or under the bark of a tree to “over-winter” until spring when a queen will emerge to establish a colony. She was mated prior to winter so she is ready to lay 10 to 20 eggs as soon as she comes out of her harborage. She will scavenge for food and build the nest until her newly emerged larva become adolescents and can help with the colonization. Yellow Jackets nest can consist of 500 to 5000 workers with perennial colonies reaching numbers up to 100,000 workers!