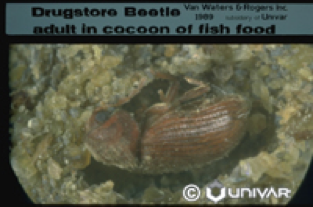 The Drug Store Beetle is a common pest of the home and storehouse.  Its appetite includes practically everything edible and many things inedible to people.  In the household, it feeds on flour, meal breakfast foods and condiments, particularly red pepper.  It has been found infesting poisonous materials like strychnine, belladonna, aconite, and wheat poisoned with strychnine.  It is also a serious pest of books and manuscripts and has been known to bore in a straight line through a whole shelf of books. The adult Drug Store Beetle is cylindrical in form, measures about 1/10 in and are uniform brown in color.  The head is not visible from above and its legs and antennae remain pressed to the body when the insect is at rest which enables it to escape detection.   Adult Drug Store Beetles resemble Cigarette Beetles but are easily recognized by the presence of rows of deep pits on their wing covers.  The wing covers on a Cigarette Beetle have no pits.  The Drug Store Beetle’s antennae have a three segmented club and the Cigarette Beetle’s antennae are serrated. 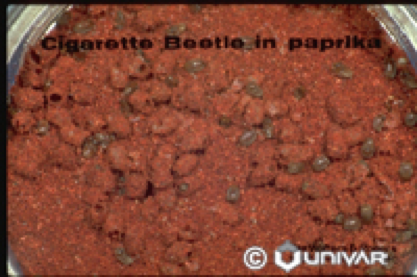 This beetle gets its name due to the fact that it is considered the most destructive pest found in stored tobacco. This cosmopolitan species infests tobacco wherever it is stored. It is also a very serious pest of books where it causes many injuries to the bindings and the leaves. The adults are strong fliers and will fly on late afternoons and dull cloudy days. It appears nearly identical to the Drug Store Beetle in appearance as well as sharing a similar taste in foods. They will feed on rice, ginger, raisins, pepper, dried fish, dates, belladonna, drugs, seeds, grains and pyrethrum powder strong enough to kill cockroaches. Dried straw flowers may be a source of infestation in the house. The Cigarette Beetle is small, squat, measuring up to 1/8 inch in length and is shiny, reddish-brown in color. It resembles the Drug Store Beetle but is lighter colored and does not have the lines of pits on its wing covers nor are their antennae the same. 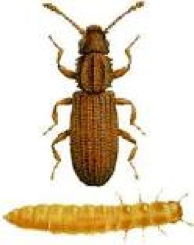 The Saw-toothed Grain Beetle is another stored product pest of great importance. It frequently infests bran, rolled oats, brown rice and walnuts. This beetle also likes to attack cereals, dried fruits, breakfast foods, macaroni, sugar, drugs dried meats, chocolate, tobacco, snuff, etc. The beetle and larvae have been known to enter every single package in a very badly infested grocery store. The Saw-toothed Grain Beetle is a small active brown beetle about 1/10 in length. Its flattened body is well adapted for crawling into crevices. The margins of the thorax are saw-like and bear six projections on each side and are the reason for its popular name. The larvae are yellowish-white and have a brown head. When fully grown it is a little less than 1/8 in length, has 3 pairs of legs and 1 pair of abdominal prolegs. It thrives on foods like rice and wheat and nibbles on this and that causing damage to multiple materials at a time. 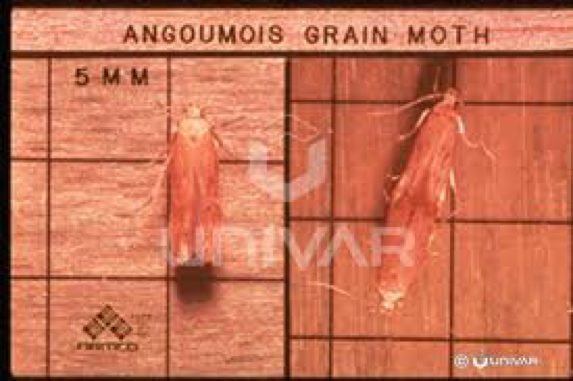 This moth is an internal feeder that prefers to lay it eggs in barley, rye, corn, oats, rice and various whole grain seeds. It also chooses damp grain over dry grain. The presence of small holes in corn or wheat as well as moths the size of clothes moths is a good indication of an infestation by this pest. It attacks dried grains in storage and also grains maturing in the field. Since the Angoumois Grain Moth is active at low temperatures, it may also do damage during the winter. Infested grain has a sickening smell and a taste that makes it unpalatable. Considerable debris created by the moths can be found on the top of infested grains, long-term storage of grains will often lead to infestation. The adult’s wingspan of 5/8 in with yellowish-white with pale yellow fore-wings. It can be confused with the clothes moth in homes because both have a similar size and coloration. The hind wings of the Angoumois Grain Moth are gray and have a thin finger-like projection at the tip. The hind wings of a clothes moth are rounded. The Webbing Clothes Moth also has a patch of reddish hairs on top of its head. 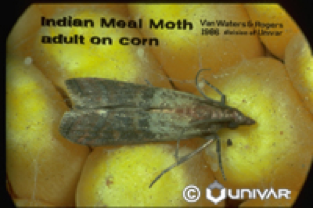 This moth generally feeds on grain and grain products, dried fruits, seeds, graham crackers, nuts, powdered milk, chocolate, candies, etc. In homes they may feed on dried red peppers, bird seed and dehydrated dog food containing meat and cereal are commonly infested. A few larvae in a package with their webbing and frass are very repulsive to homeowners and costly to the firm marketing the material. The Indian Meal Moth is the most common food-infesting moth found in homes, grocery stores and any place where dried pet foods are produced or stored. Indian Meal Moths are the easiest food-infesting moth to identify. The wingspan is about 5/8 in and the outer half to one-third of the front wing is covered with reddish-copper scales. These scales, however, are often rubbed off and are indistinct in older specimens. The larvae feed in or near a tunnel-like case of frass and silk they web together. They then emerge from their food source and spin their cocoons in the crevices in the vicinity of their food. Like the Angoumois Grain Moth, the larval stage is the only destructive phase of their lifetime. Adult moths do not feed on the materials that the larvae do.