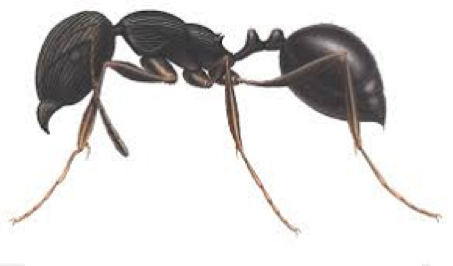 Workers are monomorphic which means they are all the same size.  It has two nodes and is 2.5-3 mm long.  The thorax has one pair of spines and a stinger is present at the abdomen’s tip.  The head and thorax is highly sculptured with numerous grooves running lengthwise and the body color is dark brown.  Pavement ants forage inside heated buildings throughout the year although they are observed in greatest numbers during summer months.  Commonly found on counter tops and around trash containers, any bit of food dropped on the floor can become black with ants in a short period of time.  Although the workers can bite and sting they are not very painful or aggressive.  The Pavement ant’s name derives from its habit of nesting beside and under sidewalks, driveways and building foundations.  In areas where this ant is prevalent, a small mound of displaced soil is observed.  During the winter they will nest inside the home in a crevice close to some sort of heat source like a radiator or sub/slab heat ducts. 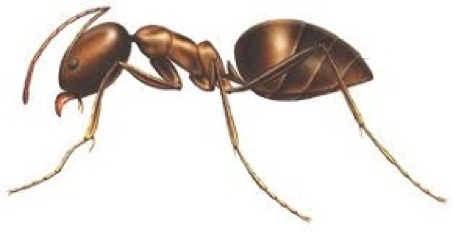 Workers are 2.2-2.6 mm long and have one sharp pointed node.  Its colors vary from light to shiny brown with the thorax, antennae and legs somewhat lighter.  Its mandibles are yellowish and toothed.  In the spring, the nests can be found in open ground with small piles of excavated earth a short distance from the nest holes.  Form boards along walkways and wooden objects of any kind are preferred nesting sites and permanent runways as are cracks and crevices in concrete walks.  These ants may also be found in enormous numbers under dead stumps, under areas of houses, wall voids and even insulation in attics.  Argentine ants establish strong foraging trails of thousands of workers.  It is an ominous feeder that lives off of a wide variety of foods. Unlike ants of most other species, the Argentine ant workers and queens even from widely separated colonies are not antagonistic to one another. 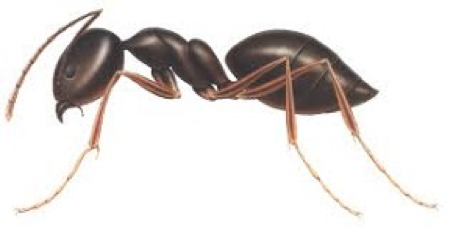 Workers are 2.4-3.25 mm long with a single flattened node that is nearly hidden.  Its body color ranges from brown to black and produces a rotten coconut like odor when crushed.  Prior to the invasion of the Argentine ant, the Odorous House ant was one of the country’s most successful native ants. Colonies range in size from 100 to 10,000 ants.  The workers forage tirelessly night and day in huge trails like the Argentine ant. They are especially likely to invade the home during rainy weather. Nests are normally found in soil and are often located beneath wood, stone or concrete. 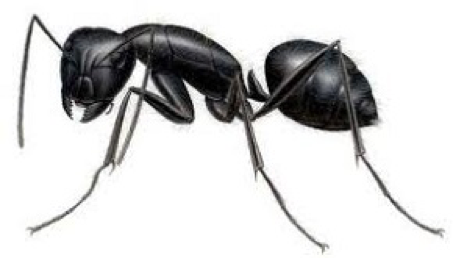 Workers have one segment (node) and the profile of the thorax is evenly rounded.  Workers are polymorphic which means they vary in size greatly, from ¼ inch to 5/8 inch in length and queens may reach up to ¾ inches in length.  There are many different species of Carpenter ants but the most commonly encountered in the western states is the Wheeler.  The body is black but the legs are deep red and the abdomen has long yellow hairs.  These long legged swiftly moving ants are among the largest ants found invading homes for foraging or nest building purposes.

These large biting ants are commonly encountered in nature on fallen logs and rocks in contact with soil.  Also found in homes where wood has 16% moisture content (which isn’t much) or more. When the nesting site is in wood it often resembles an ornate carving due to multiplicity of the galleries.  The galleries are so smooth they appear to have been sandpapered. Once the colony reaches 2000 or more members they produce winged males and females that fly out to start new colonies. This normally takes 5 to 10 years but in ideal conditions can start swarming in 3 years. Swarming happens typically in the late spring and early summer.  Contrary to popular belief, the Carpenter Ant does not eat the wood.  It only nests within it.  Large piles of “frass” are usually displaced near the entrance to the colony.  These piles usually contain dead worker ants, dirt, sawdust and any other material deemed “waste”.

Have you spotted an unwanted critter in your home or business? If so, there's probably more where that came from! Contact Parish Termite & Pest Management today to schedule your free inspection and estimate.