Rodents Seek Shelter When It's Cold, Check Your Home for Any Areas Where Rodents May Burrow 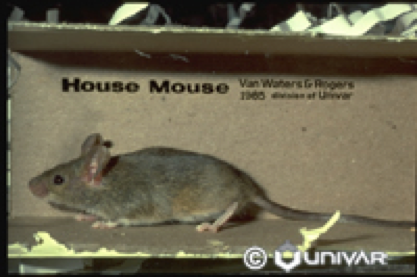 The word “mouse” can be traced to the Sanskrit verb “mush” which means to “steal”.  This mouse was known to live in Israel over 12,000 years ago and was likely present in the first agricultural settlements in Mesopotamia and Egypt.  It no doubts followed the earliest migrations of people around the world as a stow-a-way in grain supplies.  The mouse is now found throughout the world from the Tropics to the Antarctic.  The mouse has been described as a “weed”.  It is quick to exploit the opportunity and able to withstand local adversity and extinction without harm to species.  It has to be able to breed rapidly, tolerate a wide range of conditions and adjust quickly to changes in its environment.  Adults range in size from approximately 5 to 8 inches in length.  The ears are large and distinct.  They range in color from light brown to nearly black and their tails are semi-naked and about as long as the head and body combined.  Mice live in cities and towns as well as away from buildings as a field rodent.  With newly established and growing mouse populations, a long lived female can produce between six to eight litters spaced between 30 to 50 days apart accounting for 42 to 60 offspring per year. 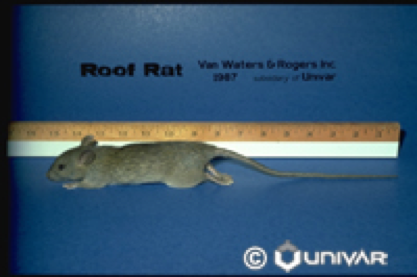 Also known as the “Black Rat” is an arboreal native of the forests of Southeast Asia. It migrated to Europe along trade routes through India about the time of the crusades during the 11thand 12th centuries. It was common in homes in Europe during the outbreak of the plague known as “Black Death” (the fleas the rat carried transferred the disease through its bites) which was responsible for the deaths of hundreds of thousands of people. The Roof rat is medium in size weighing about 8 ounces and measuring around 16 inches in length from nose to tip of the tail. This is similar to the Norway rat, however, the Roof rat is more slender and has a longer tail than the Norway rat. They also vary in color but are mostly black or dark in color and may have white or grayish bellies.

The Roof rat prefers elevated areas of treetops and roofs rendering it less available, more elusive and less dependent on the foods and harborage resources of humans. As for the Norway rat prefers the ground and relies on dumpsters and structures of humans for sources of food and water. Dense growth of trees, shrubs and vines, wood piles, sheds and accumulated yard rubbish also contribute to the infestation of this rat. In general, both Roof rat and Norway rat have litter sizes of 6 to 12 young and the gestation period ranges from 21 to 25 days. Rats are not naturally nocturnal but exhibit properties of self-preservation by commencing activities of food gathering and searching for mates while their enemies are not present. It is for this reason that most rat activity occurs at night when human and predator activity is scarce. 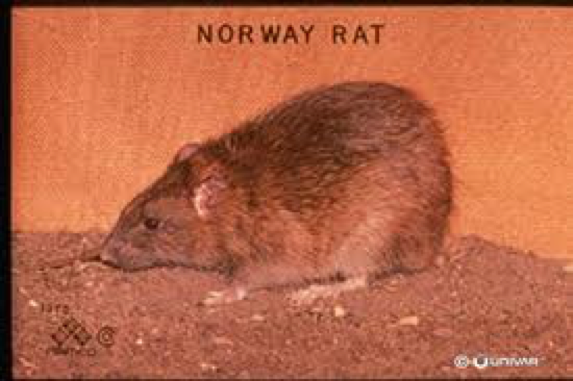 The Norway rat is the most important urban rat pest for most parts of the world. It is also called the “Brown Rat”, “Sewer Rat” and “Wharf Rat” among others. It originated in Central Asia in the former USSR. It is a more highly developed species than the Roof rat and is adapted to the dry, treeless, grassy plains of its native area. It now is common in all parts of North America and is the most aggressive of the commensal rodents we encounter in the U.S. The Norway rat is relatively large with average adults measuring 16 inches in length from nose to tip of tail and weighs 12 to 16 ounces. The tail is stumpy and shorter than the body with the average color of hair being grayish to reddish brown. Such a variation of color between the species makes it impossible to identify them by color alone. This rat prefers the ground as opposed to traveling on wires and fence lines like the Roof rat does. It burrows underground in shallow holes or bases of tree stumps and often won’t travel far from its harborage.