Spiders Are Classified as Arachnids, Not Insects 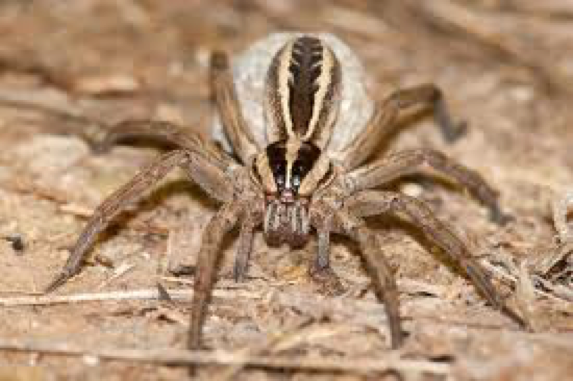 These spiders are large “hairy” running spiders that are often confused with Tarantulas.  They are active hunters and do not construct webs.  Large species are up to 1.5 inches in body length and can have a leg span up to 3 to 4 inches.  “HognaHelluo” is a common species of Wolf Spider found in cellars in the eastern United States. “HognaCurolinensis” Walckenaer is a very large species that often causes homeowners great concern when seen inside as its leg span can reach up to 3 inches across.  It is found in many parts of the United States. Numerous other species, both large and small, also enter structures. 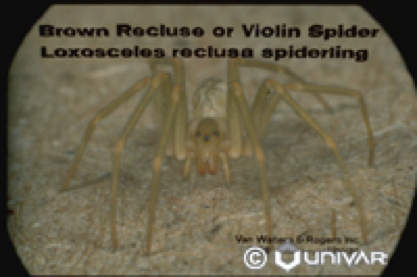 These spiders have many different species.  The widest spread and most important of this group is the Brown Recluse.  However, only 10 documented cases of Brown Recluse bites and/or sightings have been confirmed in California.  These are most likely due to the transport of commerce or domestic household goods.  Specimens collected in California are usually the Desert Recluse whose presence inside buildings is less common and whose bite is less toxic.  Also found in southern California, particularly Los Angeles is the Chilean Brown Spider.  This species leaves a very nasty bite that must be treated by a physician.  They are usually found in basements of commercial and public buildings.  The bite of the Recluse Spider family generally leaves an open, ulcerous wound, where the skin blisters up and begins to rot away.  Bites occur when a spider hiding in clothing or bedding accidentally is trapped against the skin.  The Recluse has a dark brown “violin” shaped marking on the dorsal carapace, but in some species or individual specimens, this marking may be absent or faded.  The body is colored in different variations of yellowish, tan and/or dark brown depending on species. 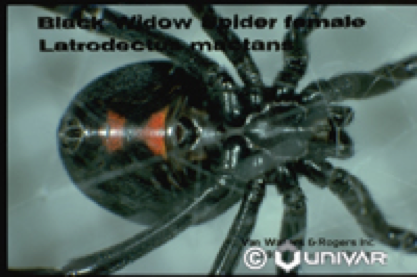 No other group of spiders causes so much apprehension than do the Black Widow spiders and their close relatives. The United States has the Southern Black Widow, the Western Black Widow, the Northern Black Widow, the Red Widow and the Brown Widow. They are present in every state in the United States as well as many other parts of the world, including Australia and Africa. In northern states, outbreaks or “blooms” of Black Widows occur periodically. The Southern Black Widow Spider is perhaps the most well-known spider in North American. The adult female is usually jet black with two reddish triangle markings joined to form an “hourglass” shape on the underside of the abdomen. Mature females are nearly ½ inch in body length and males are about half that size.  Males have whitish streaks, bars or dots on the dorsal surface of the abdomen and two triangular red markings beneath. Black Widows prefer dark cooler areas such as garages, cellars, and basements. However, they are being encountered just about everywhere during one of their “bloom” periods. Undersides of siding, foundation ledges, bushes, and even eaves have had Black Widows nesting on or around them.

Are commonly found in a variety of colors ranging from white to green. They derive their common name from their yellow color and flattened silk tube or sac they construct and hide within during the day. During the summer months, these silken retreats may be spun on the leaves of vegetation, usually near the ground. Indoors, the retreats may be found behind pictures, baseboards, ceiling tiles and similar locations. They are also commonly found in corners at the wall to ceiling juncture. Out of 191 species of Sac Spiders in North America, two species are of particular concern in structures and are probably responsible for most cases of spider bites indoors throughout the country. Bites of Sac Spiders are “cytotoxic” in nature like the Recluse Spiders but rarely result in more than localized redness and a burning sensation at the site of the bite. In some cases, a rash and/or blistering may ensue and in the worst scenarios a shallow necrotic ulcer my form on the first day at the site of the bite. Redness and itching will usually disappear after about 3 days and the bite usually heals in 10 to 14 days. 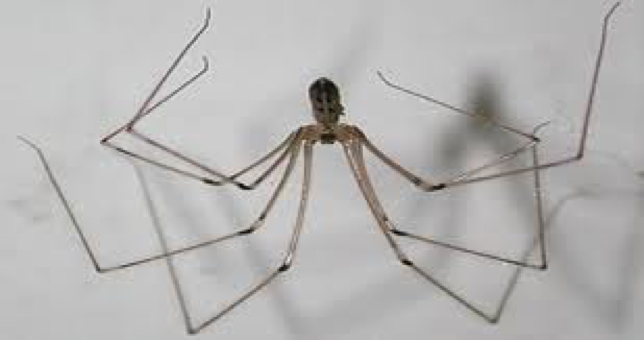 These spiders are commonly found in homes, basements, and cellars and are the most common web building spiders in warehouses. Two commonly encountered species are the Long-Legged Cellar Spider and the Short-Bodied Cellar Spider. The former has a body length of 1/3 inch, legs up to 2 inches and eight eyes. The latter is about 1/10 in with legs about 1/3 inch and six eyes. The Long-Legged Cellar Spider hangs in its web with the abdomen facing upward and when alarmed, shakes its web violently or spins around rapidly. Cellar Spiders never clean or remove their irregular webs and webs accumulate in large quantities. One species, the Marbled Cellar Spider, common in California, actually preys upon the Black Widow Spider and has been considered as a possible biological control agent for them. They are usually colored in variations of browns, tan and grays.